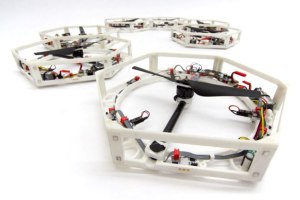 We know that robots are awesome. If that isn’t a given, I don’t know why you’re reading this, really. I’m here to show you that modular robots are the next step up the ladder of awesome. What is a modular robot, I hear you ask? According to my trusty friend Wikipedia, modular robots are individual ‘blocks’ or repeating units which can form a range of more complex configurations. I know that sounds complicated, so I’ll just show you.


First up is the MTRAN3, from (of course) Japan. If you only watch one video here, watch this one:

From the University of Pennsylvania:

And a more recent offering  – M-Blocks, from the smart cookies at MIT:

Getting to more recognisable forms, a company in Switzerland has created a modular aerial drone called the Distributed Flight Array. You can read more about this one at Wired or PSFK:

I thought I would throw this one in as well – it’s delving a little more into swarm technology, rather than modular robotics, but it’s so cool that I had to include it:

While some of these things are still pretty clunky and primitive, there is no doubt that modular robotics has a huge role to play in our future. Once the individual units are small enough, the options are almost limitless – modular robotics will turn every surface and object into a ‘smart’ object. Walls will become screens on command, every part of your home, your car, and your workplace will be reconfigurable. And that’s steering clear of military and industrial uses, which will essentially be limited only by our imagination.

Robots that look like people are so 21st century. The future is modular.